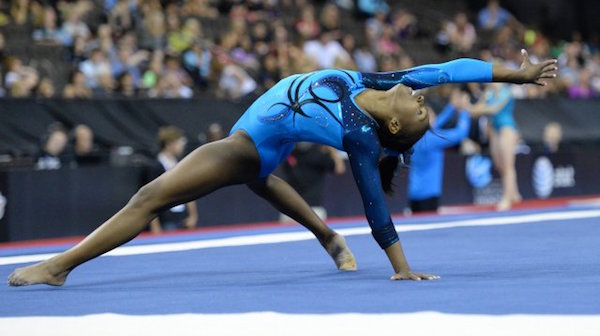 Nia Dennis, a 17-year-old U.S. national team member who trains at Legacy Elite Gymnastics, ruptured her Achilles tendon during training this week, an injury that typically requires a lengthy recovery time. Dennis was recently named as one of the competitors for the Stuttgart World Cup, and was preparing for next week’s national team camp to show readiness for this assignment when the injury occurred.

The last time an Achilles caused such strife for the U.S. team was in 2011 when 2008 Olympic silver medalist Alicia Sacramone ruptured hers while training on floor at world championships. Sacramone returned to the U.S. for surgery within days of the injury and made a miraculous recovery just in time to compete at nationals in June.

Being out for nearly a year put a major dent in her training plans, however; though she returned with her difficult Rudi and DTY vaults in addition to a solid beam, she lost floor completely and with only two events, wasn’t seen as a viable option for the five-member Olympic squad with the tremendous U.S. depth in 2012.

Sacramone had eight months to recover and put her routines back together, and even that proved to be not enough. With fewer than four months left before this year’s nationals begin in St. Louis, Dennis getting there is practically impossible, even with the greatest care.

First, there will likely be surgery to repair the ruptured Achilles. Typically following a surgery like this comes about ten weeks in a cast and boot while attending physical therapy.

“Even with the best surgery, accelerated early weight-bearing, and aggressive physical therapy, it takes 4.5 months until the tendon repair site is strong enough to tolerate explosive sprint training,” according to Dr. Lance Silverman, a Minnesota-based foot and ankle specialist. “While good surgery can permit a rapid return to cardiovascular training it cannot permit full training.”

During recovery, Dennis will be limited in what she can safely practice. It was 5.5 months until Sacramone could attempt landings, and still longer before she could reach peak Olympic condition. Her return nearly eight months to the day after the initial injury was impressive and came with a national vault title as well as a second place finish on beam at trials, but in the end there simply wasn’t enough time post-recovery to get her back to top shape.

If anything, a speedy recovery for Dennis could mean a possible return on bars, one of her best events, where she might be able to train everything but the dismount. But even this poses a major risk with falls from the high bar not exactly a good thing for someone already majorly injured. She could get back to swinging in under two months, but the big skills like transitions, releases, and dismounts wouldn’t be possible until she’s able to hit landings, and that won’t be until it’s too late. It could happen, but it’s a “don’t get your hopes up” kind of situation.

Essentially, shockingly, sadly, Dennis’ 2016 Olympic dreams could end here. Of course, there’s always hope, and anything can happen, but realistically it looks as though Dennis would be best served by a healthy, risk-free recovery before going on and dominating for UCLA, where she has verbally committed for the 2017-2018 season.

Of course, there’s also the option of continuing at the elite level. With the summer of 2017 free before she leaves for college, Dennis could attempt to make a worlds berth happen that year and then take the rest of the quad one step at a time. An injury of this magnitude combined with the terrible timing generally ends in elite retirement, but with over a year to recover and prepare for the next season, it’s not unthinkable that this could happen.

Dennis, who began her elite career with Buckeye Gymnastics, was named to the U.S. national team at a training camp in 2013 and a year later was one of the top juniors in the world. She was the silver medalist at the City of Jesolo Trophy, the Pacific Rim Championships, the Secret U.S. Classic, and U.S. Championships in 2014. Though an injury kept her out for the first half of 2015, her first year as a senior competitor, she made a strong return at Classics with her new gym, Legacy Elite. Against all odds, she finished ninth at nationals, making the U.S. team for the third year in a row and earning a spot at the worlds selection camp. She was reportedly looking “better than ever” in the lead-up to Stuttgart, making the news of her injury all the more difficult to bear.

While we are heartbroken to see such a promising young talent not get the chance she deserves, Dennis has shown tremendous strength during other trying times and has always been a fighter even when hope seemed lost. We wish Dennis the best of luck as she begins the long road to recovery, and hope to see her happy and healthy on the competition floor again soon.

8 thoughts on “Dennis Out with Achilles Injury”