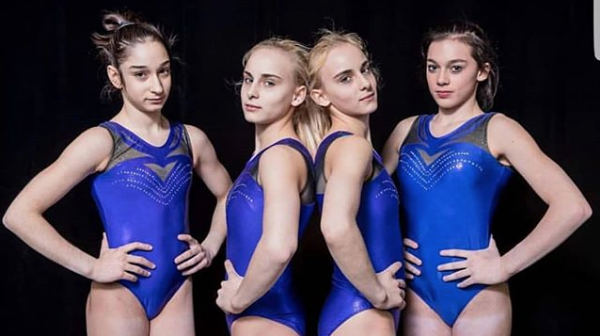 Some of these teams are pretty much solid as-is and won’t need any additional help improving their ranking, but a few teams this year have the potential to climb a bit thanks to the arrival of some top junior competitors becoming seniors in 2019.

This series is going to look at all of the top 24 programs around the world to see just how the first-year seniors could impact their teams, starting with the lowest-ranked nations in Doha and going all the way up to the top. We’ll also look at some of the new seniors from countries that didn’t qualify full teams, but that could potentially make an impact for their countries as individuals.

Aside from possibly the United States, this is hands-down the deepest, most talented class of first-year senior threats among any top team.

An all-new senior team of Youth Olympic Games champion Giorgia Villa, European bars medalist Alice D’Amato, European junior vault champion Asia D’Amato, and European Youth Olympic Festival bars champion Elisa Iorio could legitimately be the team we see at the Olympic Games in Tokyo next year. Usually we see the new seniors fighting to upset the veterans for team spots, but over the next couple of years, the veterans will be the ones worrying.

It’s not only about the talent within these four. The biggest draw with this entire group is a level of team camaraderie that goes unmatched anywhere else in the world, which is exactly why Enrico Casella has been pairing these four together over the past two years, beginning with the International Gymnix meet in 2017. Together, this team has thrived on the international scene, culminating in a huge win over the Russians at Euros last summer. In addition to training in the gym, they’ve literally grown up together as a team, building on a solid foundation of their friendship and using their bond to push each other to be at their very best (plus, they choreograph Spice Girls remixes together and that’s what wins gold medals).

A year ago, I would’ve said that Giorgia and Asia are all but locks for next year’s team, but Elisa has really upped her game on beam over the past year in addition to being a bars standout, and Alice – always the underdog in this group – is truly starting to find herself as a gymnast, going from underdog to the first of this foursome to win a major international medal at the senior level with her bars bronze in Szczecin last month.

This year’s class of first-year seniors will bring incredible depth to Belgium after every gymnast who reached the senior level in the first two years of this quad retired pretty much instantly, with the exception of Maellyse Brassart. On top of that, the federation saw many of its best gymnasts retire over the past couple of years – Gaelle Mys, Julie Croket, Laura Waem, Cindy Vandenhole, Julie Meyers, and Rune Hermans – leaving the team with only four seniors at the end of last year.

If even one of those four got injured, it would’ve meant no team competition at worlds, but thankfully this year will more than double that depth with Fien Enghels, Margaux Daveloose, Jade Vansteenkiste, Cato Fleurackers, and Julie Vandamme all capable of contributing strong routines at the senior level. All five have the potential to score around a 50-52 in the all-around, and some – like Fien on bars and beam, and Jade on floor – are especially strong on individual events, and they should easily earn spots on the worlds team this year.

Even though no one in this group is bringing in the kind of scores that will make them threats for finals at worlds, they’ll at the very least be able to contribute on a major international team, or serve as replacements if any of the top athletes are injured. Additionally, all five of these gymnasts (plus a few others, plus some uber-talented 2004 babies) have a ton of potential to do beyond what they’re doing skill-wise, and hopefully we’ll see them all stick around for at least another quad so we can watch them continue to build on what they already have.

The Netherlands doesn’t have a lot of high-D kids in the new senior group, but I absolutely love the style from girls like Astrid de Zeeuw, Sara van Disseldorp, Vera Jonker, and Laura de Witt, the four of whom are the strongest among the first-years this year.

They all have lots of great qualities in their gymnastics, and it’s quite a talented group, with Astrid particularly lovely on bars while Sara is a standout on floor. But with the current level of star-power in the senior ranks at the moment, assuming everyone’s healthy, these four will be seen more as alternate options.

So far, no one in this group has earned a major international assignment at this level, which was pretty much expected, but the Dutch gymnasts tend to peak a bit older, and I think in the coming years – especially once the current superstars start retiring – it’ll be time for the youngsters to rise up and take their places, and that’s where this year’s new seniors will be able to step in.

Right now, like Belgium, it’s just great to see the team add some new depth, and while the situation wasn’t as dire as Belgium’s has been over the past year thanks to some of the younger seniors beginning to come into their own, it’s always good to add more names to the list, and all four in this group are strong additions to the current squad.

The biggest addition to the British team this year is Amelie Morgan, one of the best juniors in the world over the past two years with medals from the Youth Olympic Games, European Championships, and the European Youth Olympic Festival in addition to British titles in the all-around and on every event between 2017 and 2018.

While she’s an individual talent in her own right, balance beam is how Amelie will make the best case for her inclusion ahead of veterans on the major international teams in the coming years. Not only is her routine lovely, but she’s actually super consistent on this event under the highest pressure, which is what the British team needs for an event that has often been problematic for them.

The British federation tends to go for flash, but they need someone like Amelie who isn’t a rockstar in terms of difficulty, but who will go in and get the job done. As a junior, she would have made a huge difference on every single senior team in 2018, especially with all of the program’s injuries, and she’ll continue to make an impact going forward.

None of the other newcomers are going to be major threats, but I really like Amelie’s club teammate Phoebe Jakubczyk, who should add some desperately-needed B team depth, and I also really enjoy Hallie Copperwheat, Mia Scott, and Scottish gymnast Ellie Patrick, all of whom showed potential at the junior level, and it would be great if we could see them or others build up to a competitive senior role.