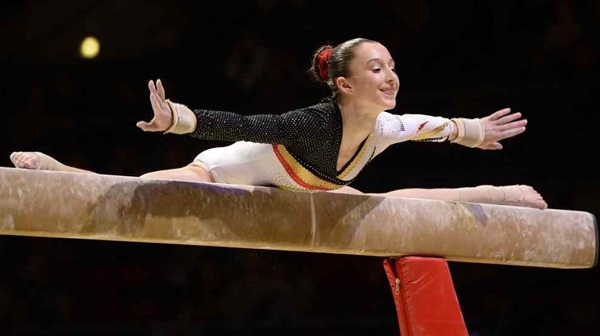 For the seniors, it was a relatively low-attendance competition with only two of the 2014 Worlds team members present. Top all-arounders Laura Waem and Julie Croket are both dealing with injury, and new senior Jelle Beullens was also missing from the picture.

Vandenhole has improved a great deal in the past year, and could be a big help to the Belgian senior program as they attempt to qualify a full team to the Olympic Games, a big goal for the ladies who missed out by just one spot after Brazil out-ranked them at the London Test Event in 2012. She looked mostly consistent in Malmedy, and adds needed depth to the team.

Mys was also great at Championships, finishing not far behind, though she seemed to be just a tenth (or less!) behind Vandenhole on each of her events, finishing about four tenths behind with a 52.933. Her 2014 Worlds teammate Lisa Verschueren earned bronze with a 52.649, posting the top scores on vault and floor but falling on beam.

Another new senior, Rune Hermans, only competed two events but had the best beam performance of the bunch, earning a 13.2 for her steady set.

The big news of this competition wasn’t in the senior field, however. Nina Derwael, who turned 15 just days before the meet and is therefore eligible for 2016, had an absolutely fantastic performance, earning a huge 55.316 (even with a fall on beam!) and nearly sweeping the event titles, taking home gold on everything but vault (where she earned silver).

Derwael has improved leaps and bounds from this time last year, when she placed 5th with just a 50.35 in the junior all-around. She showed hints of her upgrades at Elite Massilia last fall, where she tied Carlotta Ferlito for the bronze with a 53.7 in the all-around. Now she’s looking lovely on vault, posting a 14.15 on the event with a clean FTY, and she has lovely (and fun – she uses a half-traditional, half-funky mix of the pas de quatre from Swan Lake) floor routine, featuring a double tuck, 1.5 to front full, and a 2.5 and some interesting choreography, where she shows off both her elegant balletic style as well as a more sassy side with the music change. I love it.

Her big performance came on bars, where she competes an inbar full to Komova II, piked Jaeger, Ricna to pak, van Leeuwen, and a full-out dismount. It’s a big routine, and she looks mostly fantastic while doing it, showing off her gorgeous long lines and excellent handstands. There were obvious form deductions but still, it’s easily the best this team has to offer on the event.

On beam, she unfortunately fell on her bhs loso, but showed some very nice elements, including an Onodi and a side aerial after which she keeps her right leg in motion right up into a 180 leg hold, showing lovely extension and flexibility; she also dismounted with a solid gainer pike off the end of the beam.

Basically, keep an eye on this one. She is so much fun to watch on every event, always with a smile on her face and what looks like such joy for the sport.

Also in the junior field was Senna Deriks with a 52.133 for the silver medal, and Julie Meyers with a 50.250 for bronze; Deriks looked solid everywhere but beam, where she had a fall, and Meyers had a bit of a messy competition and didn’t place on any individual event, but still managed to pull out a podium spot.

Vault gold went to Maellyse Brassart with a 14.2; Brassart also earned floor bronze with a 12.766. Rinke Santy won bronze on bars with a 12.85, while Justine Sterckx and Marthe Hoskens tied for silver on beam, each earning a 12.566.

Notably missing from the junior field was Axelle Klinckaert, reportedly out due to injury.

In the Espoir competition, Imke Wolthuzien won all-around gold with a 48.750, Oriane Jungers placed second with a 48.600, and Alysha Senders placed third with a 48.300. These three captured most of the event medals, including gold on bars for Wolthuzien and gold on beam for Jungers, though Vanina Vallee also had a successful day, earning the vault and floor golds with scores of 13.2 and 12.95, respectively. Finally, Ines Gilson also brought home a medal, with her silver on beam.