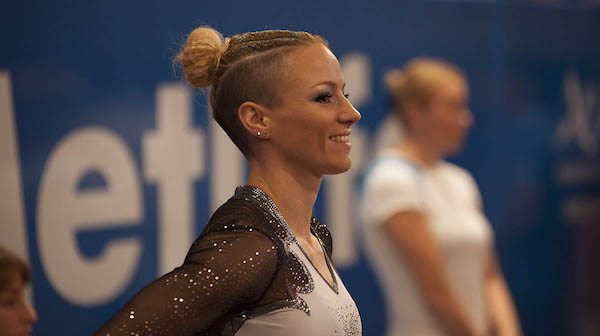 In the final day of competition at the 2014 Abierto Mexicano in Acapulco, Mexico, Marta Pihan-Kulesza from Poland took home the top all-around prize with a score of 54.45.

Coming into the second day of competition in second place, Pihan-Kulesza made the most of her two strongest events with a 13.6 on both. She went up on floor first, performing a nice double arabian and front full to her fun “Pink Panther” music, and then on beam she missed a connection between her front aerial to side somi and had a check on her illusion turn, but otherwise performed nicely to bring home the all-around gold as well as the top scores on both of tonight’s events. Last night, she also had the best score on bars…another 13.6 for her steady routine.

Emily Little of Australia led the competition after vault and bars last night, but a fall on her bhs loso series on beam today kept her out of the top spot as she earned just a 12.6 on the event. She hit the rest of her routine, including a punch front, front aerial, clean leaps, a wolf full, switch to switch side, and 2.5 with a step. On floor, she had a very solid set, including a powerful tucked full-in to open it up, earning a 13.35 to help her to a 53.55 total.

Uzbekistan’s Oksana Chusovitina, in third place last night, also had an unfortunate fall on her bhs loso series on beam, smacking the side of the apparatus pretty hard. She finished with a nice double tuck for a 12.85. On floor, she went out of bounds on her half-in half-out and took a step back on her double pike, but had a solid double tuck and earned a 13.15 for the event; her all-around score was 53.0.

Tied in third with Chusovitina last night was Enus Mariani of Italy, and because it seems to have been the theme of the night, she too fell on her bhs loso on beam, earning just a 12.35 for the event. She had a fantastic hit floor routine for a 13.6, tying Pihan-Kulesza for the title on the event. Overall, she placed fourth with a 52.95. Mariani did pick up the Elegance Prize, however, winning a GK leotard covered in thousands of Swarovski crystals.

Angelina Kysla of Ukraine was fifth after last night and stayed there today. Though she did have some mistakes tonight, she showed a graceful fluidity on beam and a great presence on floor, earning a 52.7 total to finish right behind Mariani.

Unfortunately, Amaranta Torres and Karla Retiz, the two young ladies representing Mexico, both had rough nights. Torres fell on her flight series on beam after fighting like hell for a solid ten seconds to try to save it, and though she attempted a punch double front on floor, she nearly sat it and had some messy landings throughout the rest of her routine as well. Retiz hit beam with the second best score on the event, and had a very clean 1.5 dismount, but had several mishaps on floor, including a double pike crashed to her head. She seemed okay when she got up, but looked devastated at having performed poorly in front of a home crowd.

Finally, Helody Cyrenne of Canada fell after her switch to switch side on beam, but got through the rest of her routine nicely. Though her difficulty isn’t much, she’s very new to the international scene, and wasn’t even on Canada’s national team until they wound up short for Pan Ams this summer and made her the alternate. In fact, she was a last-minute replacement for this competition as well, after teammate Victoria-Kayen Woo withdrew. Despite her lack of experience and some mistakes, she had a nice presence in the arena even when things didn’t go her way.