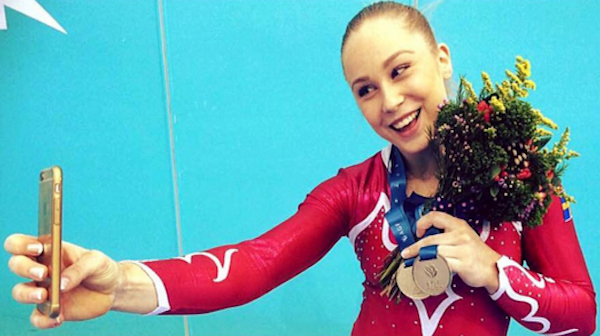 Emma Larsson, the Swedish gymnast who gets better and better with each performance, came out with a big win in the Dutch-dominated field at the Sidijk Tournament this weekend.

With a total score of 53.15, Larsson was able to narrowly defeat Dutch competitors Lisa Top and Chiara Frisina Fauste, who finished in the silver and bronze positions with scores of 52.45 and 52.15, respectively. As usual, Larsson had beautiful work on beam, posting an even 14.0 for the top score there in addition to performing a clean vault for a 13.8. While her bars and floor aren’t quite as strong, she still managed mostly solid attempts at both, finishing strong and continuing to prove why she should go to the test event next month.

Top has seen much better meets, especially on her two best events, vault and floor. I believe she was slightly watered down on both from what I’ve heard, but either way she still had the top vault score of the meet with a 13.85. In a somewhat shocking twist, she also had the top bars score of the meet with a 13.3! Given her struggles on this event in the past, it was nice to see her finish well there, which could inspire confidence going into the Olympic selection process.

Though she’s pretty unknown on the international scene, Frisina Fauste is a lovely and powerful gymnast who really stepped up and proved her worth this weekend, posting the top score on floor with a 13.8. Her bars aren’t the best, but otherwise she was a well-rounded gymnast who should be happy with her performance in Heerenveen.

Rounding out the all-around were Dutch gymnasts Mandy Mohamed in fourth with a 51.9, Evie Schellens in fifth with a 49.85, Joy Goedkoop in her return to the sport in sixth with a 49.75, and Mirte de Reiger in seventh with a 47.4. Mohamed was second-best on floor for the day with a 13.65, very impressive, while Schellens looked clean on vault for a 13.7.

Céline van Gerner competed here for the first time since the European Games last summer, and while she’s still not fully back, she showed promising work, performing every apparatus but vault. Her 13.45 on beam was the second-best there while her 13.5 on floor put her third. She’s capable of much higher scores on bars and beam, so hopefully when we see her at the World Cup in Stuttgart later this month we’ll get a better picture of where she stands. The 2012 Olympian has dealt with lots of struggles in her comeback this quad, but if she’s fully prepared she could be crucial to the team’s success this summer.

Swedish gymnast Jonna Adlerteg also made her return here after injuring her knee at European Championships last year, though her typically super impressive bars were watered down and she had some mistakes there, putting up a 13.25. Still, it was the second-best of the day, making up for her struggles on beam, where she had only an 11.7.

Vera van Pol, a member of the 2014 worlds team, had a solid meet on beam, earning a 13.3 – which I’m pretty sure is one of her best scores in years on this event – for bronze. She was definitely weak on bars and floor compared to last year, getting scores of just 12.95 and 13.0, so hopefully she’s able to pull those scores back up as she goes on this season. Sadly, her 2014 worlds teammate Maartje Ruikes got off to the worst possible start this season, rupturing her Achilles in the middle of her performance on floor. Earlier in the meet, she had the second-best score of 13.25 on bars and a fall on beam, but her injury took her out mid-routine and that’s sadly the last we’ll probably see of her this year.

The junior session featured eight Dutch competitors, with Sanna Veerman coming out on top with a 50.1 in addition to posting the best bars and beam scores of 12.1 and 12.9. Naomi Visser was second with a 48.25 while Vienne Supriana, younger sister of European Championships team member Dyonnailys Supriana, won bronze with a 48.1. Visser captured the vault title with a 13.25 and beam bronze with a 12.25 while Supriana was best on floor with a 13.2.

Rounding out the all-around were Olivia Mulready in fourth place with a 47.65, Bogusia Rossen in fifth with a 45.85, and Anyck Drent in sixth with a 44.7. Mulready won the silver medals on vault and bars. Rossen won floor silver and bars bronze, and Drent won vault bronze. Marisa Koedoot competed everywhere but bars, winning the silver medals on beam with a 12.6 and floor with a 13.1, while Tilila Oughzou competed only on bars, earning a 9.6 there.

Full results from the Sidijk Tournament are available here.