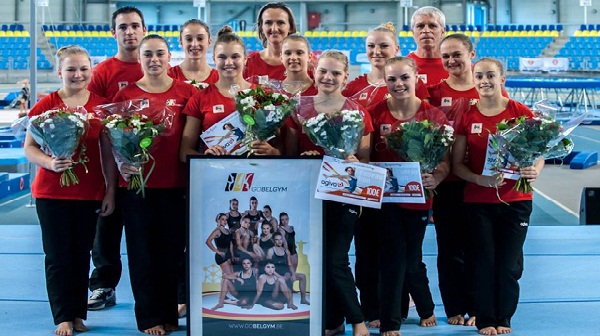 While the #TeamBelGYM girls who helped Belgium qualify a full Olympic team in Rio last month were exempt from this year’s championships, several senior women participated alongside the country’s top juniors to declare the elite national champions over the weekend.

Adelia Galofaro won the senior title with a 47.7 to defeat Dorien Motten in second with a 47.275, Chloe Beha in third with a 43.35, Laura Aerts in fourth with a 43.3, and Estelle Pitti in fifth with a 40.5. Galofaro, who became a senior last year, said she knew she had a shot in the weaker-than-usual field and is happy her competition worked out the way she wanted.

Galofaro had the top scores everywhere but bars, with a 13.75 on vault the best of her day. Motten, 24, won the bars title with a 10.775 while placing second on vault and floor and third on beam, Beha was second on beam and third on floor, and Aerts, who competed at the IAG SportEvent in the Netherlands a day earlier, was third-best on vault and bars.

In the junior division, the best in the 14-15 age group battled while preparing for the upcoming European Championships. Rinke Santy, 15, won the title with a 52.4 while also posting the top score of the day on beam, nailing her clean bhs loso, side aerial, and gainer dismount for a 13.075. She was second on the remainder of her events, looking solid and sharp which should bode well for her in Bern next month.

The tight race continued with Maellyse Brassart in second with a 50.9 and Imke Wolthuizen in third with a 50.6. Brassart looked good overall, posting the top score of the day with her 14.325 on vault, showing strong work on floor for the bronze there, and hitting her triple flight series on beam. She put her hands down on her double pike bars dismount, however, and stumbled back her double tuck beam dismount for slightly low scores on both. Wolthuizen, meanwhile, had a great day on both bars and beam, but couldn’t put up a strong enough vault to challenge at a greater level.

Myrthe Potoms was fourth with a 49.825, Britt Vanneste was fifth with a 48.625, Manon Muller was sixth with a 48.425, Alysha Senders was seventh with a 47.65, and Meredith van Deyck was eighth with a 42.7. Potoms had the third-best scores of the day on bars and beam, while Vanneste, an alternate for Euros, had the top score of 13.225 on floor and Senders was third-best on vault.

The competition also featured espoir-level gymnasts separated into three age groups. For those born in 2003, Jade Vansteenkiste was best with a 49.85 including a big 13.55 to win beam, Cato Fleurackers was second with a 48.75 and had the best score on bars, and Margaux Daveloose was third with a 47.7 and the top score on floor, while Amy Lejeune finished first on vault. Among those born in 2004, Lisa Vaelen swept the golds and posted a 49.65 to win the title by over two points, followed by Elodie Gerard in second with a 47.5 and Stacy Bertrandt in third with a 47.2.

The 2005-born age division uses a modified code of points to build D scores, so the scores here are a bit misleading, but many of these girls showed lots of promise. Ten-year-old Calisse Kums won the title with a 51.35, bringing in big start values on beam and floor where her skill level far surpasses anyone else her age. Behind her was Joey van Broeckhoven in second with a 49.85 and Kato de Laet in third with a 49.825 while Charlotte Beydts was strongest on vault and Mallaurie Sabbe finished atop the podium on bars.

The ladies with the chance at earning spots on Belgium’s Olympic team were on hand in Ghent to sign autographs for fans in addition to performing a few demo routines. Nina Derwael, who injured her hand a month before the test event and couldn’t compete in Rio, returned on beam looking steady and clean with a beautifully extended switch leap to ring leap, solid bhs bhs loso series,and lovely illusion turn.

Other exhibitions came from Julie Meyers on beam, who had a fall on her side somi but otherwise looked clean, and two-time Olympian Gaelle Mys on floor, who showcased a great double L turn to full pirouette, front double full, and a double tuck.

Full results from the Belgian Championships are available here.