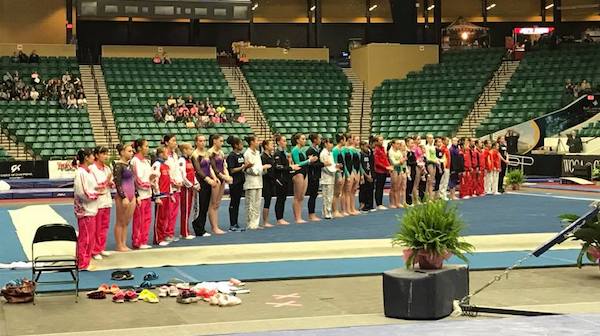 Kiko Kuwajima of Japan and Angelina Simakova of Russia won the senior and junior titles at the 2017 WOGA Classic in Frisco this weekend, showing solid work in an overall weak field as most gymnasts are still easing their way into the new year.

Kuwajima made her senior debut here, earning a 53.2 after a rough performance on bars, though her DTY vault was a highlight in the competition, outscoring anyone else on the event. She also had clean work on beam and floor, getting a strong start to her senior career as she hopes to make the worlds team later this year.

In second was 2016 Olympian Zsofia Kovacs of Hungary, who returned to competition pretty quickly after Rio last year, but is pretty downgraded in all of her work at the moment, competing just a full instead of her Yurchenko double, and taking several skills out of her other events as well. Kovacs still performed well, though, earning a 53.1 and posting the second-highest score of 14.2 on bars for her difficult and clean work there.

Two more Japanese gymnasts — Nagi Kajita and new senior Natsumi Hanashima — tied in third place, each scoring a 52.65. Hamashima hit all of her routines nicely, but doesn’t have any standout events at this point, while Kajita struggled a little on bars and beam, but showed powerful work on vault and floor, including posting the top floor score of 13.4, showing great potential there in what has been a weak year on the event.

The only U.S. all-arounder in the senior session was Adriana Popp, who spent several years on the junior elite scene and is now attempting to qualify at the senior level. Popp, who trains at Girl’s Co-Op, had a rough competition on bars, but as always, showed excellent work on beam, earning a 13.6. In the all-around, she earned a 50.7 for ninth place, showing that while she has some areas to improve, she definitely has potential to qualify at the senior level this season.

Luisa Blanco, a level 10 who trains at WOGA, competed all events but bars here, and earned the top beam score of the day with a 14.25 for her effortless and lovely routine. Her vault score of 14.1 for her solid FTY and her floor score of 13.3 were the third-best scores of the day on both of those events. Blanco, who has committed to Alabama, has no elite goals and was just competing here for the experience, but she matched and even surpassed the abilities of some of the meet’s elite veterans, making this a super successful outing for her.

In the junior competition, Simakova earned a 53.65, a score that would’ve given her the gold in the senior session, after a strong performance on all four events. Simakova showed a clean FTY for a 13.7, and her other three events were all clean and polished, with a 13.4 on bars, and the top scores of 13.5 on beam and 13.05 on floor. As Russia’s top junior at the moment, she’ll be one to watch all year, and while there are still some areas she could improve as she works toward her senior career, she definitely has great foundations and tons of potential.

WOGA junior Audrey Davis was second, earning a 53.2 with bars a standout, winning the event title with a 13.7. Her difficulty isn’t super high across the board, and she had some mistakes in her competition, but she’s lovely to watch and still managed the second-best floor score of 12.8 and third-best beam score of 12.95 at this competition.

In third was 2003-born Ksenia Klimenko of Russia. Klimenko is still highly inexperienced, with this competition her international debut. It wasn’t her best day, with a fall on vault and some mistakes elsewhere, but she was solid enough to take the bronze with a 51.3, a score she’ll definitely be able to improve as she makes her way through this season.

Beyond the top three, Jaylene Gilstrap of Metroplex in the U.S. was fourth with a 49.35 (posting the top score of 13.9 on vault for her FTY), Tienna Nguyen of Zenith in the U.S. was fifth with a 48.65 (she had mistakes on bars and beam but posted the second-best floor score of 12.8), Lisa Vaelen of De Gympies in Belgium in sixth with a 48.0, Xuan Patenaude of WIMGYM in Canada in seventh with a 47.95, and Wu Yanhui of China in eighth with a 46.8.

Japan won the team competition, which combined junior and senior gymnasts and counted the two-best scores on each event, with a 106.9, narrowly beating the host team from WOGA, which placed second with a 106.8 while the Russian juniors got the bronze with a 104.95. Beyond the podium, NSSU of Japan was fourth with a 104.4, China was fifth with a 100.8, Viagym of Canada was sixth with a 97.3, WIMGYM of Canada was seventh with a 96.25, De Gympies of Belgium was eighth with a 94.35, and Christchurch of New Zealand was ninth with an 89.5.