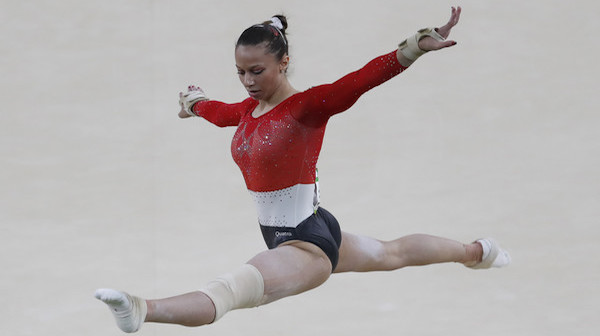 Three-time Olympian Sherine El Zeiny, who lives and trains in the Netherlands but represents Egypt internationally, won the Egyptian national all-around title in Cairo this week while also posting scores in the top three on all four events.

Two first-year seniors rounded out the all-around podium, with Farah Salem winning the silver with a 49.433 while Farah Hussein won the bronze with a 49.364. Both have the potential to stand out as top gymnasts for Egypt going forward this quad, especially as Egypt hopes to qualify a full team to the 2019 world championships.

In addition to their all-around medals, Salem won the gold medals on beam and floor with scores of 12.833 and 12.2, respectively, while Hussein won the silver medals on vault with a 13.766 for her strong FTY and on bars with a 12.166.

Samaa Gohar won the junior title with a 48.766 after especially strong performances on bars and beam, where she nabbed the gold medals on both. Alia Mostafa was the silver medalist with a 46.765 after great work on vault and floor, while Mehra Mohamed took the bronze with a 46.132 thanks to solid scores on vault and beam.

Sally Abouelenin was fourth with a 45.998 and won the beam and floor titles with scores of 12.4 and 12.366, respectively, though a rough performance on bars kept her from the podium — and probably the all-around gold as well. Zeina Ibrahim was fifth with a 45.965, Malak Al-Badawi was sixth with a 45.199, Noor Khalid Fathy El Mahdawy was seventh with a 44.899, and Salma Melige was eighth with a 43.099.