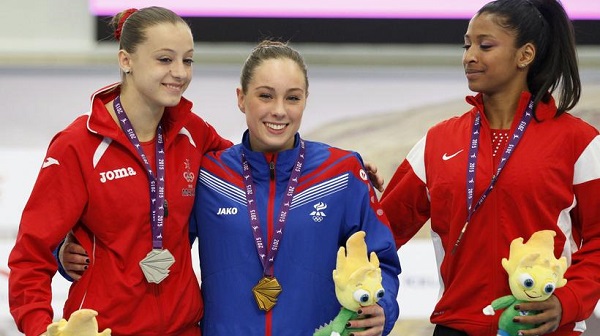 Host team Iceland had great success in front of a home crowd at this year’s Games of the Small States of Europe in Reykjavik.

Iceland’s women won the team competition by a 12 point margin with a 149.050 over second place Malta with a 137.550, besting their 2013 score by six points; Luxembourg, traditionally a country not seen at the international level in artistic gymnastics, was third with a 136.200. The other countries to compete included Monaco, Cyprus, and Andorra.

In addition to their team gold, the women from Iceland picked up 9 individual medals, including all five golds. Dominiqua Belanyi earned individual gold in the all-around (49.900) and on bars (12.6), defending her 2013 titles on both, Norma Robertsdottir took home the gold on vault (14.0 average) and beam (12.9), and Thelma Hermannsdottir picked up a gold of her own on floor (13.3) along with a silver in the all-around (48.400). Finally, Sigridur Bergthorsdottir won two silver medals, on vault (13.45) and floor (12.9).

The competition proved to be great preparation for the coming week’s European Games, with Belanyi, Robertsdottir, and Hermannsdottir representing their country in Baku. Robertsdottir has an especially good shot at earning a place in the vault final, while her teammates hope to find spots in Wednesday’s all-around final.

First-year senior Lisa Pastoret of Luxembourg was the bronze all-around medalist with a score of 46.100, coming in nearly two points above the more experienced Kirsty Caruana of Malta, who in the past year has competed at the Commonwealth Games and at European Championships. Pastoret also earned the vault bronze with a 12.9 and participated in the other three event finals, but did not make the podium.

There aren’t many videos from this competition, but here’s Dalli’s silver medal bars routine, where she highlights some very nice form in addition to giant full to stuck toe-front tuck half dismount.

The Games of the Small States of Europe were held from June 1 through June 6 as a multi-sport event highlighting competition in nine Summer Olympic sports, organized by the European Olympic Committees of nine of the continent’s small states, which are the states whose populations are less than one million. In addition to the countries participating in gymnastics, Liechtenstein, Montenegro, and San Marino also took part.