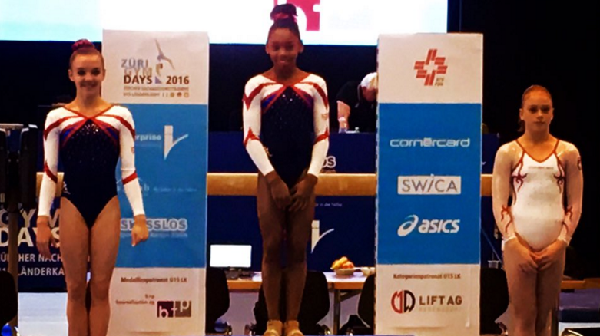 Taeja James, one of the youngest competitors at the Züri GymDays competition in Switzerland, had a fantastic performance this weekend to win the all-around title with a 54.1 in addition to helping Great Britain to a 162.6 for team victory over France, Switzerland, and Germany.

James, new to the junior international scene this year, continues to steadily improve since she debuted at Gymnix in March. With strong and consistent work on each event, James stood out especially on vault with her fabulous FTY and then also put up one of the best bar routines of the meet in addition to showing clean and tidy work on beam. Without top experienced British juniors Maisie Methuen and Alice Kinsella leading the way, James did an excellent job in her performance and should be one to watch in the years to come.

Her teammate Megan Parker, who was ninth in the junior field after some falls at British Championships this year, also had a very strong day, finishing second with a 53.7 after top-notch performances everywhere but vault (a weak event for her in general). Parker posted the best scores of the day on bars (13.45) and floor (13.55) with solid work on both, but beam was her standout, earning a 13.8 (second-best of the day) for her super clean set.

Also competing for Great Britain were Lucy Stanhope (ninth place with a 52.9), Ellesse Oates (16th place with a 51.5), Zoe Simmons (19th place with a 50.6), and Sophie Scott, who didn’t compete on floor, but contributed scores on her remaining three events and posted the highest score of the competition with a 14.2 on her incredibly powerful vault.

The French women won the silver medal less than a point behind the Brits, posting a 161.75 and led by Melissa Poitreau, who won the bronze medal with a 53.45. Poitreau showed effortless poise on beam for a 13.9 there, and also had a clean vault, though she was a bit lacking on bars and floor.

Her teammate Morgane Osyssek, who finished seventh with a 53.0, pulled in some solid numbers for France on those two events, and the team was also helped by Lorette Charpy (10th place with a 52.85), Assia Khnifass (12th place with a 52.75), Janna Mouffok (13th place with a 52.7), and Alisson Lapp (15th place with a 51.55). Lapp didn’t have a successful competition on bars, but posted one of the best scores of the day on beam with her lovely work there for a 13.75, and also contributed on floor, where her unique fan favorite routine earned a 13.0.

Switzerland brought in two bronze medals with a 160.75 for the team and a 53.45 from leader Leonie Meier, who tied Poitreau in the all-around. Meier had an excellent vault and consistent work across the remainder of her events, which are a bit lacking in difficulty, though she hit them all nicely. Her teammates Livia Schmid (fifth place with a 53.3) and Anina Wildi (sixth place with a 53.2) were also very strong, with Schmid consistent across the board and Wildi standing out with huge routines on vault and floor.

These three show a ton of promise for the Swiss program, and should help the team to a big result when they host European Championships next month. Rounding out the team were Lynn Genhart (10th place with a 52.85), Fabienne Studer (20th place with a 50.5), and Anny Wu (23rd place with a 48.65).

Germany didn’t get on the podium as a team, finishing fourth with a 158.1 in what was an otherwise tight competition. Overall, they lacked some of the difficulty brought by the other juniors here, though Helene Schäfer – younger sister of Pauline Schäfer, a 2015 world medalist on beam – is the exception with her 5.6 difficulty on beam making it one of the biggest routines of the day. Schäfer had the best all-around finish for the Germans with a 52.95 for eighth place after some low numbers on vault and floor.

The German team also featured Emma Höfele (14th place with a 51.9), Isabelle Stingl and Anudari Platow (tied for 17th place with scores of 50.7), Julia Plattenhardt (21st place with a 50.45), and Kristina Iltner (22nd place with a 50.05). They had a few rough routines in the mix, and have some work to do leading up to Euros, but a few fixes here and there put them on par with anyone else at this meet.

Full results from the friendly are available here.