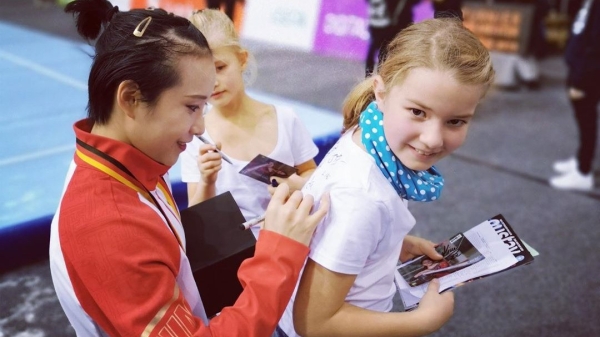 “If anyone likes their headshot, you’re wrong.” -Ruby Harrold knows how the world works, and it’s time we stop and listen.

The Cottbus World Cup happened. Here’s how the women did: Yu Linmin took the vault title, though Jade Carey’s still winning the series from the comfort of her home; Maria Paseka’s vaults were let’s call them limbs-y and she ended up in sixth. Fan Yilin won the bars final, making her likely to win the series and the Olympic spot, so good for her.

Urara Ashikawa hit a great set on beam to win the title at her first world cup qualifier, leaving Emma Nedov in first for now. Anastasiia Bachynska of Ukraine did great on floor to take the title over Kim Bui and Lara Mori; Jade Carey still leads that series too (the nerve) with Mori in second.

Also the men. Kazuki Minami won floor over Rayderley Zapata, who’s still in first in the series; Weng Hao won pommels to give him a perfect 90 in the series, as did Liu Yang on rings. Igor Radivilov won vault, with Hidenobu Yonekura still leading the series after coming in fourth.

Oleg Verniaiev took the parallel bars title, while Vladislav Poliashov’s third-place finish ties him with You Hao for qualifying points. Audrys Nin Reyes had a weird fall off high bar but at least he’s laughing about it, so. Hidetaka Miyachi won that final with an incredible routine to give him a perfect 90 and hip checked Epke Zonderland right off the top of the standings, rude.

Here are the updated rankings for women and men, though who the hell knows how the point reallocation is going to work (or not). Honestly if both Spencer AND Lauren are confused there’s really no hope for the rest of us (day one finals live blog; day two finals live blog; women’s results; men’s results).

Other things. Andrea Maldonado of Puerto Rico and Iowa State did a front triple twist (!!!) at Cottbus, and it was rated an F, which some people (and also me) think is too low. Cottbus also gave us this moment and this one, god bless us every one.

Nassar investigation was withheld from Simone. USA Gymnastics knew about allegations against Larry Nassar for over two years before talking to Simone Biles about them even though they knew she had concerns, The Wall Street Journal reported on Thursday. Apparently Biles didn’t know about the investigation until over a year after it began, and USAG only approached her after she came forward as a survivor.

The article also mentions that former USAG CEO Steve Penny tried to be Biles’ agent at one point.

Simone responded. She tweeted, “Can’t tell you how hard this is to read and process,” and called for a complete investigation. Rachael Denhollander also responded to the news, tweeting, “The organization has no business [being] in charge of our athletes…End USAG. Now.” Current USAG CEO Li Li Leung apologized to Simone in a statement to Today, saying she was “outraged” at the news.

Survivors call for more info on FBI. Survivors and their parents are demanding that the U.S. Department of Justice Office of the Inspector General release the results of their investigation into the FBI’s response to allegations against Nassar. They’re concerned in part about the amount of time it took to actually interview survivors, possible collusion with Penny, and possibly overlooking a coverup.

WADA committee wants to ban Russia. A World Anti-Doping Agency committee proposed that Russia be banned from major sporting events for four years—including the Tokyo Olympics in 2020—for doping violations. WADA will make a final ruling on the issue on December 9th. Note that if Russia is banned, there will likely be an option to attend under a neutral flag à la the 2018 Olympics.

In NCAA news, the talk of the town this week is that the nationals-winning Stanford men’s gymnastics team went to the White House on Thursday, and the Oklahoma women’s team went on Friday. Stanford said in a series of tweets that it supports all athletes who chose to go or not for various reasons.

In news we can all agree on (or can we…), Kyla Ross has a new bar routine.

Injuries. Donnell Whittenburg flew all the way to Cottbus but withdrew due to a foot injury on floor. Meanwhile, Anastasia Iliankova’s foot looks horrific but she competed anyway.

Retirements. Alex Eade of Australia announced her retirement on Thursday due to injury, and so did Brit Gabby Jupp.

Comebacks. Jade Barbosa had surgery to repair the ACL she injured at worlds.

Your mission, if you choose to accept it. Find the girl/woman who sent Chuso a five dollar bill in the early 2000s! Do ittttttt

NBC’s looking ahead. Members of the U.S. national team did their Olympic photo shoots, including Grace MacCallum, Jade Carey, Morgan Hurd, Kara Eaker, Riley McCusker, and Sunisa Lee. MyKayla Skinner just got back from her honeymoon, and everyone else either wasn’t there, didn’t post about it, or I didn’t see it. Do with this information what you will.

Somewhere, some writer is hearing us talking about the Perfect 90 and will write a piece about Simone’s quest for the elusive Perfect 90 at the 2020 Games and we’re all going to just lose it.

8 thoughts on “Around the Gymternet: Talk amongst yourselves”